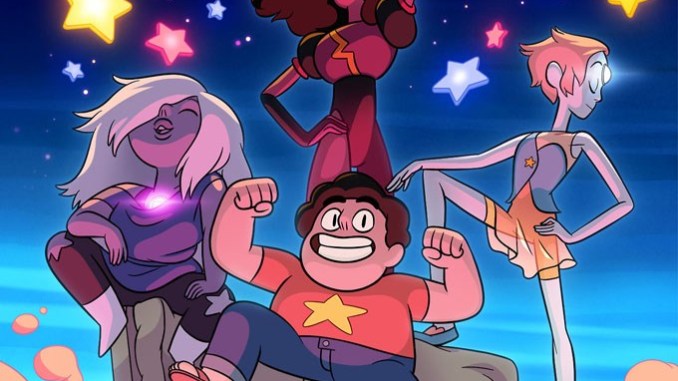 The Steven Universe pilot was never aired, however, it was included on the Gem Glow DVD and the Season One DVD and Blu-Ray releases.

Watching the pilot is interesting, because, other than the dramatically different art styles, the show is actually amazingly quite similar to what we got in the finished product.

Garnet has two gemstones here, which became a major plot point in season one of the television series. She also appears to be the leader, as she direct the other Crystal Gems on what to do.

Amethyst has the carefree, childish persona she had in the early seasons of the show, as demonstrated here by bringing the crystal skull home and then giving Steven the hourglass even though she knows it is dangerous.

Pearl is depicted as cautious here as well, demonstrated by how she tells Steven that he can’t see the hourglass as it is extremely powerful. She’s a bit out of character when she says that Steven will look like a clown if he sings his song in battle, but the way she bashfully covers her mouth when she softly laughs afterward is pure Pearl. Plus, the way Amythyst laughs uproariously and Garnet admonishes them not to make fun of Steven is definitely true to the characters they have on the aired version of the show.

As for Steven’s personality, he is exactly the curious, immature boy that he was in season one of the show. I could definitely see him accidentally use the hourglass to use a comeback when Lars insults him, which is exactly how season one Lars would act. Season one Sadie would definitely admonish Lars when he teases Steven as well, even though she had a crush on Lars at that point.

Plus, Garnet using the hourglass to win the battle after she learns that it can only be used for comebacks is exactly how she would do it in the show as well. Honestly, I prefer this use of the hourglass to the one that we got in the show in season one. Steven forming a band with past versions of himself called Steven and the Stevens was fun, but it didn’t really fit into what the show became after season one. It’s one of those weird one-off episodes that really doesn’t fit into the mold of the rest of the show.

This episode, even though it is not canon, actually does fit into the rest of the show quite nicely. Yes, the animation is more detailed and rough than the clean look the show got when it aired. However, if it was re-animated to fit in with what the show became, it would have been a great season one episode. Add a star zoom-in on Steven’s face at the end when he said “this clown is going to save your lives”, and it would fit into the show, surprisingly, perfectly.