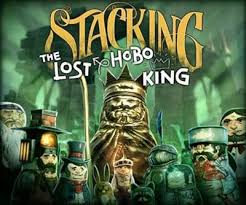 The Stacking: The Lost Hobo King review was previously published on The Adventuress on July 2, 2014, and October 9, 2014.

Stacking: The Lost Hobo King is available on consoles, computers, tablets, and smartphones.

The Lost Hobo King is downloadable content for Stacking that tells a short little story that is set after the events of the main game. It doesn’t add anything to the main storyline, but it’s funny and it has much of the charm of the main game, in a much smaller portion.

In Stacking, Charlie was aided in his adventure by a helpful hobo.  This time around, Charlie will be helping his Hobo friend by traveling to his hobo village to try to find the artifacts that will bring about the fabled hobo king.  It’s a simple story, but it’s full of the charm and humor you’ve come to expect from Stacking.  The story is still told in a silent film era presentation, the scenery is once again presented in a charming paper and cardboard style to match the Russian nesting doll characters, and the music still fits the presentation perfectly.

This being Stacking, the best thing about this little story is that you will meet a lot of new dolls, from rabbits to gypsies, and even zombies.  Since you can stack into most of them, that means that there will be a lot of new skills that Charlie can use to solve new puzzles.  The puzzles in this side quest are just as silly and entertaining as those in the main game and are definitely the main draw of the game.

The real only drawback to The Lost Hobo King is that it’s quite short.  However, the charming art style, the humorous storyline and animations, and the silly, entertaining puzzles make this worth playing.  Plus, the price is right for what you get.  It’s five dollars on consoles, but if you play it on PC, Mac, or Linux, it comes bundled with the main game at no extra charge.  If you enjoyed Stacking, it’s certainly worth playing The Lost Hobo King, no matter which system you play it on.