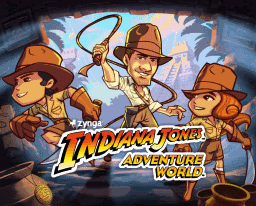 The Indiana Jones Adventure World review was previously published on The Adventuress on June 25, 2012.

Unfortunately, Zynga shut down Indiana Jones Adventure World on January 13, 2013. Because it was never released at retail, the game is no longer available to play in any form.

Indiana Jones Adventure World actually manages to feel like an Indiana Jones game, even though the main character isn’t Indiana Jones. The main character is either a male or female character, which is linked to your Facebook account. You begin the game in the jungle, and learn the basics of the game. You slash at bushes and vines with your sword, and attack spiders, snakes, and other hostile creatures with your whip. You also disarm traps by interacting with ancient carvings. After you complete the mission and recover a treasure trove of artifacts, you are brought to your home base. This is where the social gameplay comes in. In the home base, you can set up a farm, an oil rig, a well, a supply drop, a coffee plant, archeological dig sites, and other things that bring you resources you need. Your actions (such as cutting bushes or attacking enemies) take away energy, and once the energy is gone you have to wait for it to slowly replenish, ask your facebook friends for more, or buy some with real life money. This is truly a casual game at heart, and is meant to be played in short bursts. Each mission also requires a certain amount of food, water, oil, and supplies, which are acquired through the buildings set on your home base, or by visiting your Facebook friends’ home bases. You can also recruit your friends to help you on missions. They don’t play the missions themselves, as you are the one who controls them at that point. Your friends do receive compensation for allowing their characters to help you, however.

Starting with the first Indiana Jones map, Calendar of the Sun, Indiana Jones and the people from his adventures were finally brought into the game, and it also delivered the most fun missions in the game. The graphics are altered a bit here, to bring the traps a bit away from the homage feel of the original Adventure World to those you’d expect to see in a casual Indiana Jones game. Here, the game play mechanics are also improved upon, as you can now swing across gaps with your whip. Hal Barwood (of Indiana Jones and the Fate of Atlantis and Indiana Jones and the Infernal Machine fame) was brought in to do dialog for Indiana Jones Adventure World. The dialog by Indiana Jones sounds exactly as what you’d expect the character to say, which is a testament to how well Hal Barwood knows the character. The Indiana Jones missions work slightly differently than other missions, as, if you complete them when they are first introduced, you have to wait a day to play the next one unless you spend money to unlock the next location. If you play an Indiana Jones map after all missions have been added however, you don’t have to wait if you have the appropriate amount of energy, oil, food, and water to continue.

The addition of Indiana Jones to the game also brought the Indiana Jones theme music, which is played when the game starts. The game always had an orchestrated soundtrack that sounded like it could have come from an Indiana Jones game, and thankfully the original music is still here as well. The home base music is cheerful and has the whimsical feel of the most famous part of the Indiana Jones theme, while the music in the missions is more serious, setting the mood there very well. There is no voice acting here, but there are a few instances where the characters will make sounds if hurt and the sound of the voices change depending on if the character is male or female.

The game is quite a bit of fun if you can get around the social game aspect of the game. It does help to have Facebook friends that play the game, but it’s not necessary. What is necessary, however, is a lot of patience, as this is a Zynga social game, with all of the tedious gameplay mechanics that Zynga is known for. If you do manage to endure waiting for energy and asking your friends for items, the game is rewarding, and it does feel like an authentic Indiana Jones experience. However, as getting past the Zynga social game structure really is a test of one’s patience and endurance, the game definitely isn’t for everyone.

Final Verdict
3 out of 5