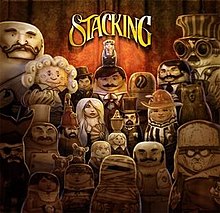 The Stacking review was previously published on The Adventuress on July 2, 2014.

Stacking is available on consoles, computers, tablets, and smartphones.

Double Fine established a reputation for making games with creative designs, quirky characters, and humorous writing.  Stacking definitely continues that tradition, with a game that transforms the adventure genre in a gratifying way, making the characters themselves the inventory.

Stacking stars a family of Matryoshka dolls, or Russian nesting dolls, who are all blacksmiths.  Being nesting dolls, they all vary in size and fit inside of each other.  The youngest, Charlie Blackmore, is the smallest child in the world and is the only doll who is in one piece, as he is the smallest of any stack.  This gives him a unique ability, being able to stack himself inside of other dolls, as long as he always makes stacks of a doll just one size bigger than the last.  There are benefits to stacking inside of other dolls, as each doll has their own ability.  Some dolls are one of many, but there are unique dolls who Charlie must find in order to use their ability to solve his goals.  Throughout the game, Charlie must solve puzzles in order to progress.  There are multiple ways to do so, but Charlie only has to find one way in order to proceed.  He can solve the puzzles in the additional ways, which will increase the percentage of completion tally, and often give you an opportunity to jump inside a doll that Charlie was unable to stack inside previously.  The puzzles are all well done, and although some of the puzzle logic gets a little crazy at times, each puzzle solution fits the world of Stacking well.  If you get stuck, you can access the menu for hints, which are presented in a helpful three-part form, similar to the old Universal Hint System files, or Sierra’s hint books that came with red decoders that would only reveal part of the solution.  The first hint given is vague, the second hint gives you a little bit more information, and the third clue tells you directly what to do to solve the puzzle.  This is a nice way to present hints, and the diversity of the of hints given should satisfy both adventure game newcomers and veterans alike.

The game is set in the early 20th century, before child labor laws went into effect.  The art style fits the era, presenting the story in a silent film style, and presenting the world as if it was created on a set, complete with ropes used for set changes, as well as curtain calls.  Like most of Double Fine’s lower budget downloadable titles, there are no voice overs, so the silent film presentation works as a nice, fitting substitute.  The entire game has an old camera filter, which makes it look like dated film.  Since the characters are dolls, the world is populated with doll sized objects, such as bottle caps and crayons, which are used for things such as furniture and hats.  The music also fits the style of the game, made in a silent film era style, with happy piano music on the scenes with Charlie, and villainous music when the game’s bad guy, the fittingly over-the-top villain, the Baron, appears.  The storyline is delightfully silly, poking fun at the class struggles of the era (which still ring true today), and there are plenty of visual jokes centered around the fact that all of the characters are nesting dolls.  The game’s finale is great fun, with a final boss puzzle that is clever, yet deceptively simple, and works great for the game.  I always enjoy well done final boss puzzles in adventure games, and this one ranks right up there with the best.

Stacking is not a traditional adventure game, but it definitely has adventure elements at its core.  The art style fits the 1920’s setting, opting for a silent film era film, complete with excellent music which fits the mood of the game well.  It also has a charming story, with a lot of puzzles to solve.  There are multiple solutions to puzzles, with a tally kept of which ways a puzzle has been solved, as well as a tally of all unique dolls into which Charlie has stacked.  So, if you want to find everything this game has to offer, you’ll find that the game does offer quite a bit of replay value.  If you don’t mind playing adventure games that try something new, then Stacking is definitely worth picking up.  It’s one of the best non-traditional adventure games I’ve played.