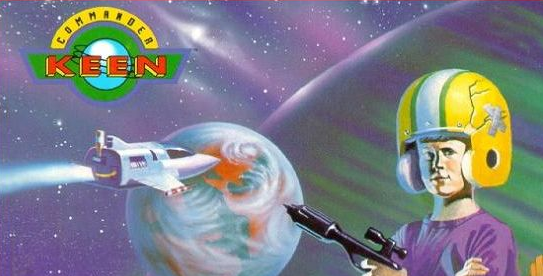 Keen: Invasions of the Vorticons review was previously published on Jupiter Beagle on October 10, 2008.

Commander Keen: Invasions of the Vorticons is available from Steam.

Commander Keen: Invasion of the Vorticons is the reason I bought a Super VGA monitor for my PC in the 1990s, and there’s a good reason for it.  Commander Keen is one of the best classic platformers, and my number one pick for the game I’d love to see come to the Xbox Live Arcade.

Invasion of the Vorticons was a three-part trilogy was a shareware game by iD Software and published by Apogee.  The idea of shareware was that the first episode was free to download and upload (from dial-up text-only BBS systems before the internet), copy, and share with all of your friends.  If you enjoyed the game, the rest of the episodes could be purchased by phone or by mail from Apogee, who would mail you the episodes on .

The trilogy starred the 8-year-old genius Billy Blaze, who built a spaceship out of household parts.  He dons his brother’s football helmet and defends Earth from the forces of evil in the galaxy as Commander Keen.  Part one finds Keen marooned on Mars, where he must find various parts for his spaceship so he can make his way back home.  In part two, the Vorticons have a cannon aimed at Earth, and Keen must go to the Vorticon mothership in order to stop the destruction of his planet.  Episode three concludes Commander Keen’s fight with the Vorticons, as he explores the caves of the Vorticon planet, does battle with the top Vorticon ninja fighters, and discover the secret of the Grand Intellect.

At first, Keen can only jump over creatures or jump on top of the weaker ones.  If he tries to hop on a strong creature, Keen loses a life.  The weaker creatures are only stunned, and snap out of it momentarily.  These weaker creatures just push Keen forward, while the stronger ones kill him on contact.  There are hazards on the levels, such as pits, fire, and spikes, which also cause Keen to lose a life upon contact.  Once Keen finds a laser gun, he can shoot laser shots until he runs out of ammunition or finds another gun.  Located throughout each level are candy treats and soda, as well as things like teddy bears.  Collecting these adds to Keens points, and at certain score levels Keen recieves more lives.

Later on, Keen also finds a Pogo stick, which lets him jump higher when the pogo button is pressed, which can get Keen to higher platforms and collect more treats.  Some levels require exploration, as there are doors that can only be opened by finding the correct colored key (a gameplay concept that iD will later incorporate into it’s popular first person shooting games).

The later games in the trilogy keep the gameplay mechanics of the first (only now Keen has the pogo stick right away).  The stages in the games become tougher as they go on, with more hazards and stronger and higher concentrations of enemies.  The games sported great graphics at the time for the PC, which was on par with the graphics on the Nintendo Entertainment System.  The music, however, is non-existent.  The games were made at a time when most PCs did not have sound cards, and sounds came from the PC speaker, which produced terrible sounds.  So, there are only bloops and bleeps in here for the jumping and shooting sound effects.  These sound effects are not bad though, and the game is engrossing enough that even playing through the game again recently, I didn’t notice the lack of music.

Commander Keen: Invasion of the Vorticons is a definite classic.  The storyline is interesting, the graphics are nice, and the gameplay is superb.

Final verdict: Four and one half out of Five