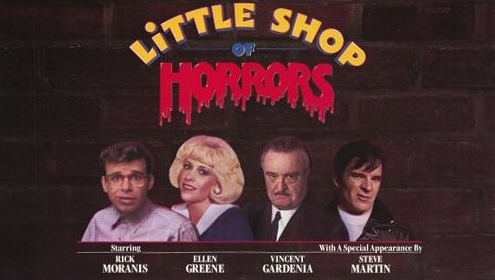 The Little Shop of Horrors review was previously published on Jupiter Beagle on October 11, 2008.

Little Shop of Horrors is available on DVD, Blu-Ray and on digital marketplaces.

For the next 20 days leading up to Halloween, I’m going to review some of my favorite horror-themed entertainment.  To start the 20 Days of Halloween Celebration, I decided to review one of my all-time favorite films, Little Shop of Horrors.  This film is based on an off-Broadway musical that itself was based on a low budget cult-classic black and white horror film.

The film stars Rick Moranis, who plays a nerdy florist who works at a florist in a poor neighborhood.  The owner, Mr. Mushnik, is about to close the shop due to weeks of little to no business, when it is revealed that Seymour bought a strange plant to try to improve business.  He names the plant Audrey II, after the other employee of the florist, a girl who Seymour has a huge crush on.  The strange plant brings in a ton of business from curious people coming in to see it.  Seymour soon has a problem, as the plant is slowly dying.  He tries everything to make it healthy, and pricks his finger on a thorn.  The plant responds to the blood, and Seymour soon finds out that human blood will make the plant thrive.  This is when the fun kicks in, and the horror plot soon unfolds as the plant gets larger and larger and needs more blood than Seymour can provide.

Remaking the film into a musical seems like a strange choice, but it works well.  The movie is made very tongue-in-cheek with over the top acting, and unrealistic 1950s and 60s era American ideals.  The musical actually makes all this campiness a lot of fun.  The music was written by the famed musical duo of Howard Ashman and Alan Menken, who would later write the music for the Disney animated films Beauty and the Beast and Aladdin.  The music is written in the style of 1960s rock and roll and is incredibly memorable.  A song sang by Steve Martin, who plays Audrey’s abusive dentist boyfriend, easily steals the show.

Fans of the original musical will be somewhat sad to know that the ending has changed here to something movie test audiences found more satisfying.  In the process, one entire song from the musical is omitted from the movie and is available only on the movie’s soundtrack.  However, if you want to see the original ending there are DVDs available with deleted scenes with the original ending on them.  For most people, this won’t be an issue, as the new scene in question does work quite well to end the movie.

The music is wonderful and the casting is great.  There are plenty of cameos of Saturday Night Live and SCTV alumni throughout the film.  The movie is over-the-top and very campy, but as it is based on a low budget horror film it works out well.  If you’re a fan of musicals or horror-comedies, you owe it to yourself to see this movie.