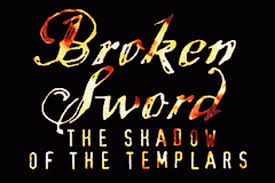 The Broken Sword Review was previously published on The Adventuress on September 28, 2012.

Broken Sword is available on GOG.com and Steam.

Broken Sword: Shadow of the Templars (known as Circle of Blood in the original US release) is the first game in the Broken Sword series.  It has been released in different versions: the original and the director’s cut.  Like my Monkey Island mega reviews, I’ll review both versions of the game here.

The game features excellent hand-drawn art with fluid 2D animation in the game’s cutscenes.  The director’s cut adds new character portraits when the characters are talking to each other.  The updated art in high definition is hit and miss, as some of it looks really nice in high definition, whereas other pieces look simply upscaled from their originals.  The director’s cut also has a new opening with new art that matches the original, as well as a truncated version of the original game’s opening which now features a voice over to fit the tone of the rest of the game, and it occurs after a new scene which features the French reporter Nicole Collard in a playable role, as opposed to the original where American George Stobbart was the only playable character. The removal of the original cold open with a blank screen and a voice-over by George in favor of adding Nico as a playable character has been derisive amongst fans, but I personally quite like the change. I wish there had been more playable Nico scenes in the remake, as Nico has always been seen in the original game sitting in her house, yet she tells you that she has done some investigating of her own in conversations. The new scene fills you in more on what Nico has been doing on her part of the game’s mystery. The truncated version of the original opening still works well, and the cuts don’t make the game lose anything story-wise.

The story is mostly serious, dealing with murder and conspiracies, but there is a lot of humor found throughout the game, mostly through George’s antics and observations.  There are also some humorous references to Revolution’s previous games that fans should be able to pick out. This is a dramedy rather than a straight drama, and both the dramatic and comedic elements are written well.  The story is one of the most memorable that I have experienced in an adventure game to date.

This game takes place in many different locations, mostly located in France, but there are other countries visited as well.  The locations are very memorable, with nice hand-drawn art that represents each real-world location very well.  The characters that George meets as he visits each location are memorable as well.  This is thanks in large part to the voice acting, which is outstanding.  The main characters, George and Nico are voiced excellently, and each of the side characters are excellent as well.  All of the voices fit the personalities of the characters, and many of the voices are memorable enough to stick with you after the game is over.  The music in Broken Sword is very nice, and it fits the mood of the game very well.  The style of music changes based on which location in the world you visit, which is a nice touch.  There is nothing that will stick in your head after the game is over, but it does add nicely to the game’s atmosphere.

The game’s puzzles are well thought out.  They are challenging while still being fun.  The director’s cut has extra puzzles in the form pattern matching sequences that are reminiscent of the casual adventure puzzles in Doctor Who: The Adventure Games (which Charles Cecil of Revolution oversaw).  The new puzzles don’t add much to the game, but they don’t detract too much as they are few and far between.  The original game had death sequences, which were very rare, and happened at times where danger was hinted towards the player.  The director’s cut eliminates the few instances where death is a possibility in the game.  The director’s cut also changes a puzzle with a goat that is notorious for giving players of the original game a difficult time.  The puzzle isn’t too hard, it just requires thinking outside the box.  However, the new version works just fine, slightly changing the mechanics without changing the intent of the original puzzle.

Broken Sword is considered a classic in the genre for good reason.  It is one of the best adventure games released in the mid-1990’s.  The art is beautiful, the characters and the performances of the voice actors are memorable, the music fits the mood of the game, and the story is one of the best of the genre.  You can’t go wrong with Broken Sword, no matter which version you choose to play.  The director’s cut does have some hiccups, with an uneven translation of the art into high definition and new casual adventure puzzles that don’t add anything to the game.  However, if your platform only includes the director’s cut (or the original), it’s still worth playing.  That said, I would suggest staying away from the Game Boy Advance version if possible since it replaces a lot of the animation with still frames and eliminates the excellent voice work (the Nintendo DS version also eliminates the voice work. However, it keeps the animation and adds the new close-ups from the director’s cut to the dialog on the top screen, which works well).  Ultimately, the best choice for Windows users is to buy the game from GOG.com, as both the original and the director’s cut version are included for the same price. That way you can get the best of both worlds.