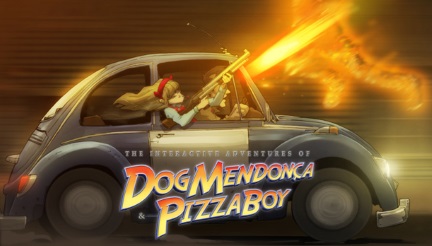 The Interactive Adventures of Dog Mendonça & Pizzaboy Review was previously published on The Adventuress on March 12, 2016.

The Interactive Adventures of Dog Mendonça & Pizzaboy is available on Steam.

The Interactive Adventures of Dog Mendonça & Pizzaboy is an adventure game based on the graphic novels which take place in a world where monsters are real, and they live among humans. Chronologically, it takes place between the first and second graphic novel, when Pizzaboy is still with his girlfriend, Ana.

An overweight werewolf named Dog Mendonça acts as the in-between between the humans and the monsters, creating the code, a set of rules which prohibit supernatural beings from interfering with the lives of humans. His home town of Lisbon, Portugal has been the Casablanca of the modern world, where humans live their lives unaware of the super-powered living among them. However, if someone breaks the code, Dog Mendonça is there to stop them.

However, Dog Mendonça is more brawn than brains, and has an oversized ego on top of it.  To keep him in check, he has a team with him consisting of a demon named Pazuul who is trapped in a little girl’s body, a gargoyle head without a body, and a former pizza delivery boy named Eurico Catatau. Eurico is the actual brains of the operation, and is the person who conducts the interviews in order to do actual detective work, rather than brute forcing their way through the sheer luck that had worked before they met him.  Of course, being a human, the supernatural beings naturally have a hard time taking him seriously, Dog and Pazuul included.

The investigation element is strangely the weakest part of the game, although it is the most effective at emulating the film noir style that they are aiming for.  This is due to the strange execution, in which Eurico already asks the questions before the player is given a chance to take control of the situation.  This results in Eurico asking the same questions again, and hearing the same first line from the suspects plus additional dialog.  This makes it feel a bit needlessly clunky, and takes you out of the story.  It’s a shame really, as the rest of the system is executed well, with multiple questions allowed to be asked, and the ability for Eurico to go down the wrong path in interrogation. Sometimes it’s humorous to watch the suspect’s responses when you aren’t going down the proper line of interrogation, although it’s a bit tedious as you have to ask the same questions again when you do. If the game didn’t ask the questions before starting, the interrogation aspect would have been a lot more fun.  As it stands, since the same questions are asked multiple from the start, hearing the same questions yet again by going down the wrong interrogation path feels more monotonous than it should.

Thankfully, the rest of the game is top notch.  The crowdfunding pitch for the game mentioned that the developers were inspired by Monkey Island, and that inspiration does wonders for the game. There are a few instances of objects that blend into the background well, so the right click to highlight hotspots function works well to prevent frustration from pixel hunting.  There is also a notebook in the pocket in the inventory menu, which comes in handy if you need a refresher on the current quests that Eurico has found himself thrust into.

The puzzles are as well done as the games that inspired it, and the inventory combination puzzles are well done and never overused.  There are no brain bending puzzles here, but there are a few that should give seasoned adventure gamers a few minutes pause.   All of the puzzles are nicely executed, and they all fit within the logic of the game world, strange though it is.

The story is also excellent, fitting well within the world of the graphic novels, yet it is executed in such a way that someone new to the series will be able to have fun with the game without any prior knowledge of the source material.  The storyline is quite well done, and is a mystery that is interesting to see unfold.

The game is a murder mystery, but it is full of humor.  The comedy in the game takes its cues from the one-shot comic where the characters break the fourth wall, and the humor goes a bit more over the top than it does in the main series.  This works well for this style of game, as adventure gaming is a bit absurd in reality, with characters with near limitless space to hold items.  The characters here poke fun at that and other conventions of the genre, and are well aware that they are in a game, and are characters from a series of graphic novels.  It’s fun and silly, and this style of humor should resonate with anyone who is a fan of the comedic LucasArts adventure games or the humorous games of the companies who had sprung from them, such as Telltale Games or Autumn Moon.

The music is also well done, fitting the tone of the game well, and complimenting the excellent backgrounds.  The art style is easily the best part of this game, bringing the art style of the graphic novels into interactive media perfectly, and looking beautiful while doing it.  There are many locations in this game, and each is as detailed as the last.  It’s easy to find yourself slowing down and just enjoying the scenery for a bit.  There are a lot of little details in the background, including many humorous references to various adventure games and films.  The characters are also just as well done, also perfectly emulating the style of the comics, making a perfect blend with the backgrounds.  In certain scenes, there are also comic style close-ups, where a series of stills will be shown to emphasize the action.  This works well, and further makes it feel like a natural extension of the graphic novels.  It’s also never jarring, as it is subtle, and its execution feels a lot like the art of Dave Gibbons in Beneath a Steel Sky.

The Interactive Adventures of Dog Mendonça & Pizzaboy is an excellent translation of a fantastic graphic novel series into a fun adventure game.  It is very much a classic style adventure game, with humor and puzzles inspired by the LucasArts adventure games.  The puzzles are also just as well done as their inspiration, as while there are no brain-benders, all of the puzzles fit well within the logic of the game world.  The story is fantastic, with a murder mystery mixed with an excellent humor that works in a world full of bizarre supernatural characters.  The voice acting and music are both well done as well, working well with the story and atmosphere of the game’s setting.  The art style is the clear stand-out of this game, as it is beautifully translated from the graphic novel to the computer screen, with the characters looking spot on from the comic, and every location brimming with an exquisite level of detail.  The only drawback of the game is the weirdly presented interrogation system, as it gets a bit tedious hearing the same question being asked multiple times. However, since these moments are few and far between, the other qualities of the game far overcome this.  The story and presentation is so well done, any feelings of tedium are very short lived.  It’s a game that is worth playing for any fan of comedic inventory based puzzle adventure games.