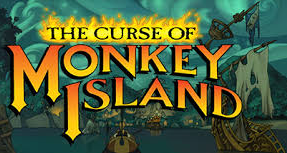 The Curse of Monkey Island Review was previously published on The Adventuress on October 3, 2014.

The Curse of Monkey Island was re-released digitally for modern computers on Steam and on GOG.com in 2018.

The Curse of Monkey Island was the first game in the Monkey Island series that wasn’t designed by the trio of Ron Gilbert, Tim Schafer, and Dave Grossman.  Like Day of the Tentacle before it, it also differed significantly in art style, and the game’s tone took on a slightly more lighthearted tone.  However, it managed to carry on the legacy quite well and became the standard that future games in the series would follow.

The game takes place after the events of the twist ending of Monkey Island 2, with Guybrush mysteriously floating in a carnival bumper car in the middle of the ocean.  Guybrush soon finds himself having to escape LeChuck’s clutches, in an attempt to free himself and his on-again, off-again girlfriend Elaine from his ship.  Guybrush bungles the rescue, however, and accidentally turns Elaine into a gold statue.  Now he must find a way to turn her back to her old self.  The game doesn’t explain the ending of the second game until the end, as the storyline presented here comes first.  However, that ended up being a good thing, as it trod new territory for the series, and managed to do so quite well.

The game’s art style was vastly different from previous games, giving the characters an elongated, rubber-armed, cartoon feel, with the backgrounds having a curvy, cartoony feel to match.  The game’s tone differed slightly as well, with a slightly more light-hearted, silly feeling, which matched the new game’s art style.  The music, however, was quite familiar, featuring the same kind of Caribbean themed music by Michael Land that gamers have come to expect of the series.

Some other areas that the game trod are not new as well. The game sees itself returning to the sword fighting of the first game, with the new caveat that the insults have to rhyme.  This is done in the same way as the original, in which you have to fight pirates to learn more rhymes until you can win your ultimate fight and accomplish your goal.  This is the only part that feels like it’s somewhat uncomfortably treading worn ground, but it’s thankfully a short part of the game, and it livens things up a bit by adding the ship fighting duels that were cut from the first Monkey Island back into the mix.  The ship fighting has two options, an easy mode for people who don’t like action, which only takes one hit to defeat a ship (as long as you upgrade to a powerful enough cannon), and a harder mode which requires you to fire cannons and avoid enemy cannon fire in order to win.

Like the second game, the game also has two modes of difficulty for its puzzles, a normal mode, and a Mega Monkey mode, with the harder puzzles falling into the latter category.  The puzzles here are all quite good, and stay true to the logic of the game’s world (which, in this case, is more cartoony than previous games, so some puzzles take that into consideration but work well nonetheless). Of special note is an excellent interactive song puzzle at the middle of the game, which uses the iMuse interactive music system quite well, and is especially memorable.

Guybrush runs into several familiar faces in this game and meets some new people as well.  Before the special editions were released, this was the first game in the series to feature voice acting.  Both the returning characters and the new ones are voiced excellently.  Guybrush, in particular, has a voice well suited to his personality, as performed admirably by Dominic Armato.  The new characters are all quite memorable, with great vocal performances and memorable eccentric personalities.  One, in particular, Murray the demonic talking skull, as voiced by Denny Delk, has received a well-earned cult following, and has appeared in both Monkey Island sequels that followed this game.

The Curse of Monkey Island is a departure from the tone and style of previous entries and lacks the designers who made the originals.  However, it manages to carry the legacy quite well, with an engaging, funny storyline, memorable characters, excellent voice acting and music, and great puzzles.  The tone and style of The Curse of Monkey Island were used as a standard for the games in the series that followed it, and with good reason.  It has stood the test of time quite well as a true classic of the adventure genre.