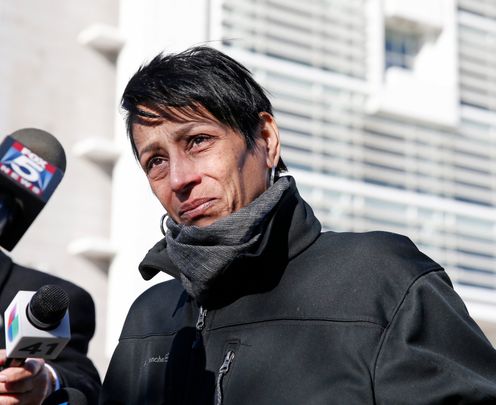 Evelyn Rodriguez was struck and killed by a sports utility vehicle Friday at the site where her 16-year old daughter and her 15-year old friend were found beaten and slashed by Mara Salvatrucha, better known as MS-13, gang members two years ago.

She was hit at approximately 4 PM in Brentwood, NY after an argument with a driver of an SUV. Rodriguez and another person were standing in the street yelling at the driver before the vehicle sped up and hit her. She was pronounced dead at the hospital.

A police official, who was not authorized to discuss the investigation and spoke on the condition of anonymity, confirmed the events to the Associated Press and stated that, so far, there is no evidence of MS-13 involvement, or that it was an act of retribution by the gang.

The driver remained at the scene and was not immediately arrested, while police continued to investigate what prompted the confrontation.

Ms. Rodriguez became a nationwide voice against gang violence after her daughter’s death and worked with lawmakers about the issue. Peter King, a Republican member of the House of Representatives from New York, worked with Ms. Rodriguez on a campaign advertisement and was on the way to the memorial when he heard that she had been hit. He told the Associated Press, “it’s a tragedy beyond belief. Everyone is in shock. What more could happen to one woman?”

Freddy Cuevas, the father of the slain teenager, was distraught over the death of the mother of his child, which occurred near the site where the teenager was discovered. “It’s not fair”, he cried.

Suffolk County District Attorney Tim Sini, who was police commissioner when the teenagers were slain, stated that he was heartbroken over her death, and added, “she was a fierce advocate for her hometown of Brentwood and was fearless in her fight to put an end to the violence caused by MS-13 to ensure that other parents never have to endure the pain she suffered.”

The suspected killers of the teenagers were arrested, along with other suspected members of MS-13, and are facing murder charges that could result in the death penalty. Prosecutors stated that Ms. Rodriguez’s 16-year old daughter, Kayla Cuevas, was targeted because of ongoing disputes with gang members at her school, while her friend, 15-year old Nisa Mickens, was at the wrong place at the wrong time.

Ms. Rodriguez filed a $110 million lawsuit last December against the Brentwood School District. She said that employees failed to act when they were told that she was being threatened, and the bullying went on for two years before she was killed.

The killing of Kayla Cuevas and Nisa Mickens was mentioned by President Donald Trump at the State of the Union address, and their parents, including Evelyn Rodriguez, were in attendance at the speech. President Trump responded to her death on Twitter, saying “my thoughts and prayers are with Evelyn Rodriguez this evening, along with her family and friends.”

The photograph in the header of this article was taken by Kathy Willens of the Associated Press.