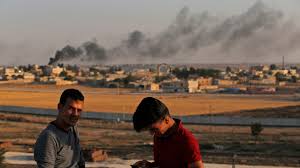 The prison camps guarded by the Syrian Democratic Forces have not been able to be properly guarded since the troops stopped fighting against ISIS and began fighting against Turkey since the Turkish military began killing them on after President Donald Trump ordered U.S. soldiers, an ally of the SDF forces in the fight against ISIS, out of Syria last week.

This has come to a head, with a car bombing in Qamishli, the largest city in the Kurdish-held Northern Syria, by the ISIS terror group. This led to the escape of 950 ISIS supporters from a prison camp there.

Over 130,000 people have fled Northern Syria to escape Turkish forces, but despite the escape of ISIS terrorists and the displacement of Syrian citizens, President Erdogan stated that he plans to continue Turkey’s operation against SDF forces in Northern Syria.

The European Union and the United Kingdom, Russia, and Iran have condemned the Turkish operation in Northern Syria.