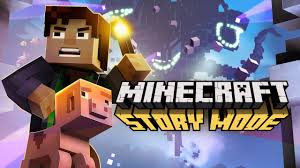 The Minecraft Story Mode Episode 4 Review was previously published on The Adventuress on April 16, 2016.

After a short episode that felt like it was just the build-up to future episodes, the third episode of Minecraft: Story Mode delivers with an excellent episode that lives up to, and in many ways, exceeds expectations.

In this episode, the Order of the Stone is reunited, and the Wither Storm threat is ready to be dealt with.  However, things aren’t as simple as they seem.  The story really begins to take form here. The setup for the story was interesting, but it did seem like a standard wish fulfillment story.  It still is that, of course, as it is inspired by family films of the 1980’s such as Goonies and Back to the Future. However, this episode has taken that formula, and twisted it a bit.  Our would be heroes are given a lot more to work towards to achieve that dream. In addition, the choices made in the previous episodes affect the story more here than before, and there are finally some real consequences to the choices.

The characterizations here are great.  Both the reunited Order of the Stone and our young heroes are given time to shine.  It’s really fun to see these two factions finally get to spend time together.  Our heroes are big fans of the Order, and that still shows.  But, in their conversations with the Order, they’ve shown that already grown up a lot since the first episode.  The two factions converse largely as equals, and that makes for a really enjoyable moment.  The voice work of the cast, of course, has a lot to do with that enjoyment.  Everyone here delivers some of their best work of the season.  Both Patton Oswalt and Catherine Tabor deliver great lines as Jesse, and, as always, and the supporting cast is great as well.  Depending on your choice in the first episode, you will either have a full Order of the Stone, or a complete set of people in Jesse’s group.  These optional people are among the highlights of the voice cast in this episode.  It’s worth playing through both just to see the different interactions between the two factions depending on who you have on your team.

I’ve enjoyed this season a lot as it’s been bringing classic puzzles back in Telltale games, and combining them with choices and consequences gameplay quite nicely.  As I alluded to before, the choices and consequences system here is finally starting to pay off with some real consequences to your choices.  The puzzles also shine here.  This episode has one of my favorite puzzles so far, in the scene where the group searches for the remaining member of the Order, Soren the Architect.  The puzzle is also accompanied by a fun little song that is presented in the style of a 1920’s recording. The entire sequence reminds me of one of Telltale’s Sam & Max episodes, which is definitely a good thing.

On the subject of music, Anadel continues to deliver here.  The entire game has a retro feel to it, from the story, to the blocky graphics of the Minecraft world, to the choice of 1980’s stars as the supporting voice cast. The soundtrack fits that just as well.  As we’re getting farther into the story, and our heroes are getting into more danger, the tone of the music is adjusted to suit that as well, but still manages to continue the synthesized music style that worked so well in previous episodes.

The third episode of Minecraft: Story Mode really shows that this series has staying power.  The second episode felt just like a build up to a bigger story, but now that we’re knee deep in it, that setup was worth it.  The story gets a major twist here, and the characters are fleshed out more than ever. The voice actors deliver their best performances of the season.  Plus, the art and music continue to work well, conveying the retro feel which the story is striving towards.  The choices and consequences are finally starting to have a meaningful impact, and the puzzles are among the best of the season so far.  The game is a great merger of classic Telltale, with puzzles, and modern Telltale, with choices and consequences.  If the season continues on the track it is now, it can very well end up being among Telltale’s best games.