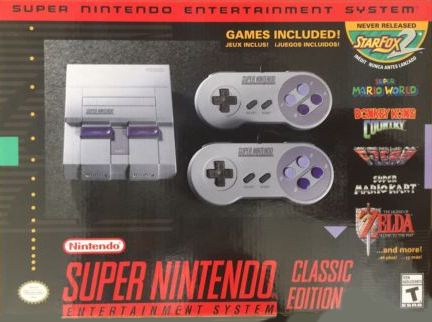 Nintendo followed up their popular NES Classic Edition with a system that is arguably even better than the former: the Super Nintendo Entertainment System Classic Edition.

The system runs on the same Allwinner R16 “system on a chip” as the NES Classic Edition, with a 1.2 gigahertz quad-core Cortex-A7 central processing unit, a 500 megahertz dual-core Mali-400 ARM graphics processing unit, 256 megabytes of random access memory, and 512 megabytes of Flash storage.

This time however, the system comes with two controllers (although the cables are still quite short). It also comes with twenty of what are arguably the most classic games for the system, including Contra III: The Alien Wars, Donkey Kong Country, Earthbound, Final Fantasy III (known as Final Fantasy VI in Japan), F-Zero, Kirby’s Dream Course, Kirby Super Star, The Legend of Zelda: A Link to the Past, Mega Man X, Secret of Mana, Star Fox, Street Fighter II Turbo: Hyper Fighting, Super Castlevania IV, Super Ghouls ‘n Ghosts, Super Mario Kart, Super Mario RPG, Super Mario World, Super Metroid, Super Punch Out!!, and Star Fox 2. The latter was completed and canceled in the 1990s, and is available for the first time on the Super NES Classic Edition.

As with the NES Classic Edition, we’ll be looking in depth at the above games in the future, and the links will be updated accordingly.  But, suffice to say, at $80 USD, this retro micro-console is a bargain, especially considering how much some of these cartridges go for on eBay. The system is technically already discontinued, but at the time of this review, most retailers still have plenty of stock.