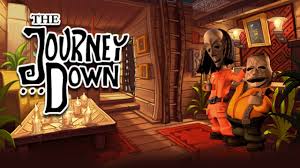 The Journey Down Chapter 2 Review was previously published on The Adventuress on November 2, 2014.

The game is available on personal computers.

The second chapter of the three part saga of The Journey Down is finally here.  It’s been in development for quite a while, but they say good things come to those who wait, and that idiom is certainly true in this case.

The game picks up right where chapter one left off, and the trio find themselves in deeper trouble.  Bwana and Kito are separated from Lina, and they must escape their situation and find out what happened to her.  The story really picks up steam here, as the game slowly unfolds the mystery surrounding the events that led Bwana and Kito to the state in which we met them in the beginning of chapter one, and we begin to get an idea why the journal of The Journey Down is so important to so many people, including the antagonists.  In addition, the new characters introduced here are really quite interesting, and are all multifaceted people who fall in the grey side of the law, which is carte blanche in the mist shrouded port town of Artue.

The art style was brilliant in chapter one, and that brilliance continues here.  All of the new characters have the awesome style inspired by real tribal masks from Africa. There’s a lot of variety in the new faces, but they all fit right along side the ones we have already met.  The locations are also all just as beautifully detailed as the first.  There is actually more variance in art styles in some of the cutscenes, such as displaying the scene in silhouette, which actually works well, and works well with the misty, gloomy mood of this chapter.

The composer of the first chapter, Simon D’Souza, unfortunately passed away this past May.  There are some tracks on the game which are by Simon, which set the tone of the game just as brilliantly as before. There are also some new tracks by Jamie Salisbury, which really work well with Simon’s. All the tracks are jazzy, but there is a little bit more variety in them, which works well as Port Artue is a very different place than St. Armando, both in the mood of the people that live there and in its architecture. Port Artue is made to feel like a living, breathing town much more than St. Armando was in the first chapter, both in it’s characterization and in the fact that Port Artue is given such a rich history in game.  This makes exploring the town much more satisfying. Rounding out the sound of the game, the voice work also continues to shine.  The returning characters are just as excellently voiced as before, and the new characters compliment them well.  There is a wide range of personality brought through both in the dialog of various characters, and in the performances of their actors.  The feeling of elation on exploring is increased as it is fun to talk to each of the town’s interesting characters.

The puzzles are also excellent here.  Where there were one or two puzzles in the last chapter that stretched the boundries of reality somewhat, the puzzles here are all quite logical.  The game is much longer than the first chapter, and the puzzles are all excellent throughout.  The puzzles also increase in difficulty as the game goes on, with the final chapter having some excellent puzzles dealing with artifacts which are reminiscent of some of the best puzzles in classic adventure games such as Indiana Jones and the Fate of Atlantis.

The second chapter of The Journey Down is one of the best adventures of this decade.  Everything is excellent, from the unique character art style inspired by real African tribal masks to the wonderful background art that compliments the characters wonderfully.  The story is excellent, and there is a great deal of backstory learned, both for the characters and the town itself.  The latter, mixed with the wonderful dialog and voice acting of the town’s inhabitants, makes the town a joy to explore.  The puzzles are all well done, and increase in difficulty as the game goes on.  The first chapter felt like, with a few improvements, it could be a contender to the throne of successor to the adventures of the classic era.  Those improvements are here in full force. If the third chapter is as strong as the second, The Journey Down could potentially claim that throne.