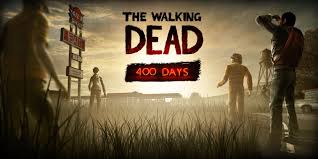 The Archive is a series that takes articles written by Jennifer McMurray in the past and presents them here on MIC News for a new audience.

The Walking Dead: 400 Days review was previously published on The Adventuress on October 8, 2014.

400 Days is downloadable content for The Walking Dead: Season One that tells the story of five different protagonists who survived the first 400 days of the zombie apocalypse in a single episode. It is an ambitious story experiment by Telltale Games, and one that mostly manages to work, with a few hiccups.

The story takes place during the first 400 days of the zombie apocalypse, from the early days of the outbreak, to a time period taking place after the five episodes of the first season. The stories interconnect with each other, and at times even reference events and characters from season one. Unlike Telltale’s previous games, you can choose your protagonist from the start. You will have to play as all five protaganists, but which order you choose determines at what point in the timeline the story will be told. This means that you can either play the story linearly from day 1 to day 400, or jump around as you wish. This choice is nice, as it gives the player a freedom of choice that they hadn’t had before, but it’s also one of the episode’s major drawbacks, as ultimately the order doesn’t really matter, as the purpose of the story is simply to tell five stories about how five people with five very different personalities had come to survive the apocalypse. This is mostly remedied by the fact that the stories told are all quite interesting, and they surprisingly manage to flesh out the characters quite a bit in the very short playtime that each character is given in each of their single chapters.

As usual for this series, the voice acting and music is excellent. Each actor portrays their role with a truly genuine feeling, from the main characters to the side characters, and the music manages to hit all the right notes to fit the mood perfectly. The art style continues to shine, with each location and character having a comic style look to them, as in the series proper. As far as game play is concerned, this episode continues on the course started by the finale of The Walking Dead, by no longer having true inventory puzzles or direct controlled action sequences, with gameplay only consisting of player choice and quick time events. Unfortunately, as each chapter is very short, the limitations of this style shows more than usual, as the choices don’t immediately affect the way characters treat you in the story as much as they did in the main series.

400 Days is an experiment in storytelling that manages to work quite well as a story, but leaves a little to be desired as a game. The choice based gameplay worked fine when you had a whole season, or even a whole episode focusing on choices made and how characters react to those choices. With each chapter being quite small due to a limited time allotted to each character, this style of game play doesn’t quite work as well. However, the five stories told are all quite interesting, and the voice actors portray the characters (as well as the characters met by the protaganists) quite well. The music and art style, always a high point for this series, also continues to shine here. So, it might still be worth playing if a strong story and presentation are enough of a pull for your tastes. If you prefer a little more substance to your gaming, you might want to sit this one out.