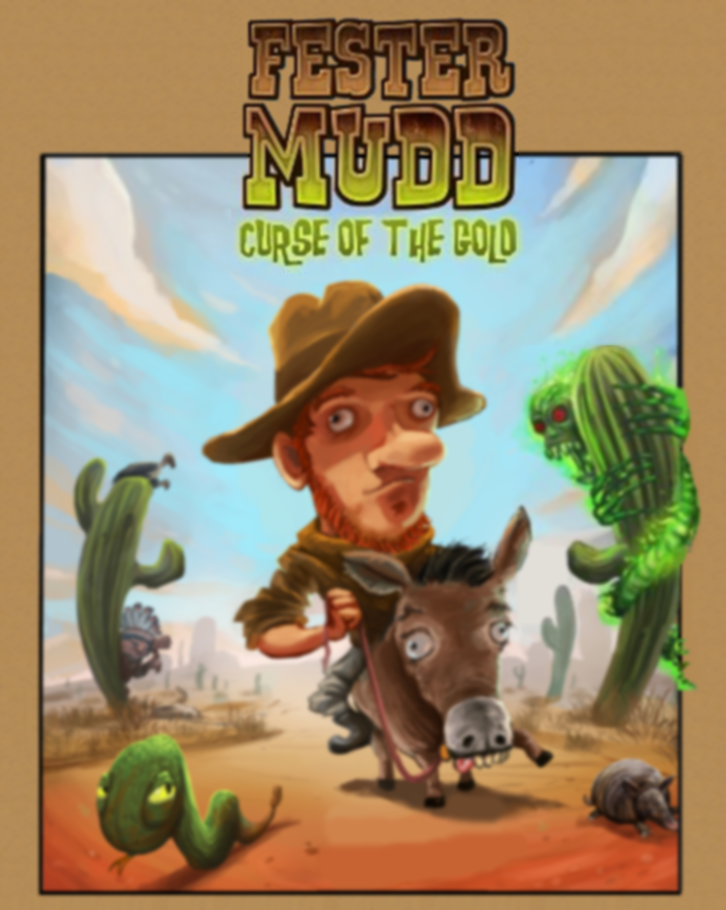 The Fester Mudd: The Curse of the Gold review was previously published on The Adventuress on March 12, 2013.

Paavo Härkönen of Prank, together with Josh Mandel of Replay Games (and formerly Sierra fame), released a comedy adventure set in the American Old West. The game is self-described as a tribute to classic adventure games. Does it live up to the predecessors it emulates?

This episode opens up with Fester Mudd receiving a letter from his brother claiming that he found gold and asking Fester to come to see him in the town of Loamsmouth. When he gets there, he discovers that finding his brother is not as easy as he thought it would be and that many of the townsfolk stand in the way of his discovery. The game is similar to game series such as Monkey Island, in that it doesn’t accurately represent the time period that it’s set in. The game contains many anachronistic items that are used as visual jokes, such as electrical lights and bottle machines. The first puzzle you encounter is an anachronistic one on its own, which is familiar to our time but not the 1800s in which the game is set. This is all done for comedy value, and like The Secret of Monkey Island before it, works quite nicely.

The humor is done well. There aren’t any laugh out loud moments, but there are times that will make you smile. Like Josh Mandel’s classics, a lot of the jokes come from the description of objects in the game. There are also a lot of funny references to the classics that inspired the game, such as the aforementioned Monkey Island series as well as the Josh Mandel (and Al Lowe) Sierra western adventure Freddy Pharkas: Frontier Pharmacist. The story itself is interesting, but it’s more of a set-up for what’s to come as not much is revealed yet.

The game is definitely classic in its aesthetics. The interface contains a verb bar and inventory at the bottom of the screen in the style of the classic LucasArts adventures from the early 1990s. The style is also reminiscent of those games, drawn in a low-resolution pixelized style that is reminiscent of that time period. Like those games, the characters themselves aren’t very detailed, but the backgrounds are. The background art manages to be pleasing, showing just enough detail without being . The game does feature the occasional close-up, which allows for a more detailed view of the characters (mostly the main character, Fester Mudd). The character portraits are done in a cartoon style which fit the backgrounds and the general tone of the game just fine.

The puzzles in this game also more closely resemble the classics than games of today. The puzzles aren’t quite as hard as the games of the past, but they aren’t easy either. The game does have some puzzles that can only be opened up after an event is triggered and you re-enter the area later. This is all done logically, and fit well within the game’s story. There aren’t any dead ends, and thankfully there are no small inventory items that require pixel hunting. There aren’t any deaths either, so you are free to experiment at your leisure. This was nice, as there were a few puzzles that I left for a while, explored the other areas of the game, and came back later to solve with a fresh mind.

The game’s music is done well, also in a classic style. There aren’t any pieces of music that stuck in my mind after playing, but they fit the atmosphere of the game nicely. The game doesn’t have any voice acting, however. The dialog is all displayed as pure text. There are some moments where some of the game’s dialog is presented as sound effects though, such as dogs barking. I never found myself missing the lack of voice,  since it went with the classic theme the game was presenting. The humor more than made up for the lack of voice in my opinion.

Fester Mudd is a great start to what is shaping up to be a very entertaining adventure game series. The art style is in a well-done classic pixelized style, the game is funny, and the puzzles are fun and challenging (without being too much so). There’s not much revealed of the story yet in this episode, as it’s all a set up for a sequel, but what’s there is well done and interesting. The game’s music fits the atmosphere well. The lack of voice work may put off some, but the humor makes up for the lack of voice in my opinion. I recommend this game to anyone who is a fan of the classic adventure games from the early 1990s.