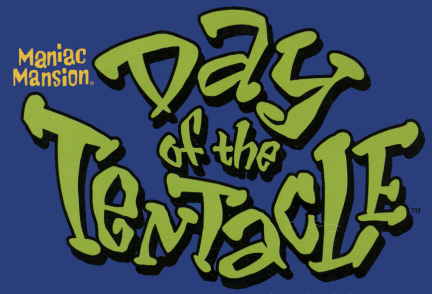 The Day of the Tentacle review was previously published on The Adventuress  October 2, 2014.

Day of the Tentacle is available in a Remastered version on Steam and GOG.com.

Day of The Tentacle was the sequel to the first point and click adventure game by LucasArts, Maniac Mansion.  It differed significantly in tone and style from its predecessor, only sharing a few main characters between the games.  This is not a fault for this game, however, as its excellent game design has made it a classic in its own right.

Day of the Tentacle takes place several years after the teenagers broke into the Edison mansion in the first game.  One of the characters from the previous game, Bernard, is now living with his roommates, a roadie named Hoagie, and a medical student named Laverne.  Bernard soon finds himself having to go back to the mansion with his new friends in order to stop a mutated purple tentacle from taking over the world.  To do so, Dr. Edison sends them through time to stop the tentacle’s plan before he starts it, however, things don’t go as planned, and the trio finds themselves stuck in different time periods.

That’s where the brilliance of the game design comes in.  Like the first game, objects can be shared between the three characters.  Here, this is facilitated by sending them through the time machine (or via the character’s icon in the verb menu, to save time and ease the process).  Additionally, because the game takes place hundreds of years apart in the same mansion, it is sometimes necessary to manipulate an object in the past to have it change in the future.  It leads to some very clever, and humorous, puzzles.

The humor here is vastly different from the original Maniac Mansion, opting for a Saturday Morning cartoon style instead of the pastiche of B-movies, but it works well.  The art style has been changed to reflect this, going for a Chuck Jones style in the art and animation, and, as in a Chuck Jones cartoon, much of the humor comes from the animation of the characters.  The music style also differs to fit the change in mood, going for a zany circus style instrumentation.  The game’s characters are also as wacky as their environments, with voice-overs suitable to their personalities.   The game’s sound effects are also memorable, also going for a cartoon sound, and fitting in perfectly.

Day of the Tentacle was a radical change from its predecessor, going from a rock-fueled pastiche of B-movie horror films to a Chuck Jones-inspired of Saturday morning cartoons with a circus-inspired soundtrack.  The radical shift in atmosphere between the first and second game in the Maniac Mansion series actually works, however, as the mad professor’s machinations are well suited for either style.  This game doesn’t have the multiple characters to choose from or the multiple endings of the original, but the characters and story presented here work quite well.  Additionally, it also benefits from the lack of dead ends and deaths that were present in its predecessor.  This game is considered a classic today, and it is well deserving of its title.  It has a whimsical art style and has music and sound effects that help set the mood perfectly.  The CD version is the version to get, as the voice-over work is excellent.  Day of the Tentacle also has a funny, memorable story, and some of the best puzzles of the classic era.  If you haven’t played this game, you really owe it to yourself to track down a copy and give it a go.

There is one more option available since I first wrote this review. There is now a Remastered edition by Double Fine. I’d recommend this version, as the high definition art is respectful to the original, it has speech with less compression than the original, it has options to switch between enabling the verb menu, having the classic or new music, and having the classic or new sound effects. The original version is also available to be enabled at any time, so even purists will find value in the Remastered edition.