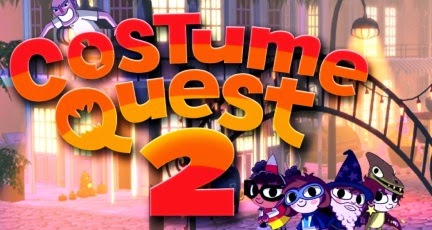 The Costume Quest 2 review was previously published on The Adventuress on October 26, 2014.

Costume Quest 2 is available on consoles and computers.

Costume Quest 2 has mostly the same mechanics as the original. Once again it’s a role playing game where children attack using the powers of their Halloween costumes by means of turn based combat and quick time events to increase damage and block attacks. However, it adds enough to the formula to make it an even better game than its predecessor.

The plot is much stronger, and more memorable this time around. It takes place immediately after the cliffhanger ending of the Grubbins on Ice downloadable content. The group heads through a portal and are transported back in time to Halloween. This is the beginning for the plot device of this story. It is a time travel adventure, where the kids have to travel back and forth through time in order to stop an evil dentist from ridding the world of Halloween.  There is also a lot of the series trademark humor here as well, including quite a few injokes to previous Double Fine titles and nods to famous films.

The group leader is once again chosen from between the fraternal twins Wren and Reynold.  This time, however, they are joined by a differing third party member depending on what time zone they are in.  There are a number of new costumes to find, and if you pre-ordered from Steam, there are also four costumes that return from the original game.  The PlayStation versions also have a bonus costume that turns into Sackboy from LittleBigPlanet.  This time around, you can also upgrade your costumes to make them more powerful in combat.  As with the other games in the series, some costumes also have abilities that can be used outside of combat.  These abilities are used to solve interesting side puzzles to open more areas to explore or to find hidden areas with more powerups. There is also a humorous hard corn mode, which requires having the candy corn costume in every battle.  The candy corn can’t do anything in battle and instead has humorous messages displayed every time it is the corn’s turn to fight.  These messages can be quite hilarious, and really help to add to the charm of the game.  The other costumes are also as humorous, with a lot of funny animations for each of the suit’s power moves.

The powerups are now battle stamps, which can be used once and then can only be used after a specified amount of rounds of combat.  After combat, the group no longer automatically heals. Healing can be accomplished one of three ways: through a battle stamp that will automatically heal your party after winning a battle, through fountains that are placed throughout the game world, or by eating candy at any time outside of combat.  The combat is once again turn-based, with quick time events to increase damage and block attacks.  This is still a drawback to the gameplay, as it does get repetitive after awhile.  However, this is somewhat alleviated by the fact that there are more enemy classes to fight this time around, which mixes up the formula quite well.

The art style is also much more detailed in this game.  The characters retain the same cute style as in previous games, but the backgrounds are much more lush and detailed.  There is also a lot more variety in the places visited in the game.  There is a Louisiana bayou, a future dystopia of a mixed human and Repugian society, and of course the present area around Wren and Reynold’s home.  The latter is familiar, but the others are just full of great scenery that helps to add to the wonder of the game world.  There still isn’t any voice acting, but once again the music is fantastic.  This time, owing to the fact that there is a lot more variety in the areas of the game, there is a lot more variety in the musical style as well.  All of the music is excellent and strengthens the atmosphere of each of the locations.

Costume Quest 2 does fall into some of the traps of its predecessor, with repetitive turn-based combat and quick time events.  However, it rises above the original in every other area.  It has a much more imaginative and memorable plot, based on time travel.  The humor is also in full force here, from the funny lines from the characters met in the game’s world, to the humorous messages during hard corn mode, to the funny animations of each of the power moves made by different costumes in combat. There are a lot of areas to travel through, with its  background art, and an excellent variety of musical styles to match each of these varied locations.  In the end, Costume Quest 2 ends up delivering on its potential by being a more fun and rewarding experience than the original.

(Side note: The lore of Costume Quest is continued in the graphic novel Costume Quest: Invasion of the Candy Snatchers.  It reverses the roles, as a group of Repugian children come to the human realm in search of candy on Halloween.)