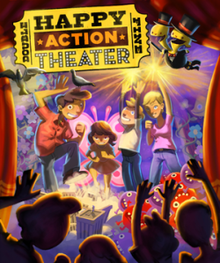 The Double Fine Happy Action Theater review was previously published on The International House of Mojo on February 21, 2012.

Double Fine has been making their latest games in easy to digest bite-sized chunks, but nothing they’ve made up to this point is as bite-sized or easily digestible as Double Fine Happy Action Theater.

The game is aptly named, as it plays out as separate set pieces setting you free to do whatever you want in each set. The default mode is a theater mode, where the game automatically starts after the mandatory logos and then automatically chooses a new mini-game after a few minutes. This title was clearly designed with young children in mind, and this automatic system makes it perfect for even the youngest of children. All of the other Kinect games out there require some degree of precision, even those aimed at children. So, ultimately the under 3 set is left out. Here, with everything automatic, you can just let your kids have at it and do whatever they want. You can also press start at any time to bring up a menu to choose any mini-game giving you all the time you want to play a particular stage. This makes it perfect if your child (or yourself) enjoys a particular mini-game and wants more time with it, or if you need some extra time to get an achievement on a particular mini-game.

Double Fine has made it so that the sensor tracks movement easier than most other Kinect games as well since it is not absolutely necessary to have full body tracking for the game. This makes Double Fine Happy Action Theater‘s best feature possible: Up to six players can play at a time. It also makes it possible for children (and impatient adults) to just hop into the game and play without having to worry if the sensor is tracking your body correctly.

Adults may also find the title fun, as my mother and myself did since there is a lot to discover in the mini-games. There are references to Double Fine games, and even characters from other Double Fine games and the Action Comics to be found within. The games also have some unexpected things to be found, since the game uses every single feature of the Kinect at some point. My mom and I laughed out loud once we realized one of the things the microphone was used for.

I referred to the mini-games earlier as set pieces, and that’s really the best way to describe them, as none of them are really a game, with the possible exception of the Breakout-style mini-game which has a score, albeit arbitrary, that resets to zero once you lose your last ball. The rest of the mini-games have no set goal, leaving you free to experiment with the game to try to find out the hidden things the designers put in each mini-game, and to try to come up with weird things to do with the Kinect. The only real goal for gamers in the game is the achievements, which are actually helpful since most of them give hints towards fun hidden things that you might not have known were there otherwise. The achievements also gave me the inspiration to experiment with the Kinect sensor. In order to get the 6 pack achievement where you are supposed to have 6 friends, I used six chairs and myself. Since the game doesn’t track full bodies for every player, I was able to duck down behind the chairs once I was recognized and sneak out to get another chair to try it again. I put a teddy bear in one chair and was surprised to see the Kinect recognized it as a player, complete with a tiny skeleton. It’s quite amusing to just put the game on the dance stage and watch the teddy bear dance. It’s also amusing to sit while on the dance stage, as it makes you look like you are short with tiny little legs. It’s these kinds of things that make you come back to Kinect again, just to see what else you can do with a little imagination.

There are 18 mini-games, plus a credits screen which is a combination of another mini-game (the previously mentioned dance stage) with developer credits, complete with the dancing images of (most of) the development and production team at Double Fine and Microsoft. The balloon mini-game is the first game that starts once you start the game, which is perfect for my 1-year old nephew who loves balloons. My personal favorites are the image manipulation stage, the dance stage, and the monsters attack stage. In the image manipulation stage, images of people and objects in the room are captured and then frozen on the screen. You can then put yourself in front of or behind the objects captured on the screen, so you are in essence interacting with objects that are no longer there. It is quite fun to interact with yourself on screen. Five pictures are taken in total, and then the images reset. In the dance stage, you don’t have to do anything, just sit there and watch yourself dance. This is where I did all of my experiments with the chairs and bears with the Kinect sensor. Not only can you watch yourself and random objects dance this is also the stage where many of the Double Fine’s characters can be found from previous games ranging from Psychonauts to Stacking, as well as the Double Fine Action Comics available on Double Fine’s website. In the monsters attack stage, you crush buildings and swat at planes, helicopters, and zeppelins and periodically a picture will be taken showing you attacking the city on the front page of a newspaper.

I can actually play all of these all by myself, but the fun definitely comes in with multiple people. For me, the Breakout stage is the most fun to me with multiple people. This game is in the style of Atari’s Breakout, where your body is the paddle and you have to bounce the ball up to hit the blocks above. If you bounce a ball that is the color of your paddle, the ball splits in two. As I mentioned above, this is the only stage where points matter, as the score resets after all the balls are lost. The score doesn’t save, but it is fun to see how high of a score you can reach. The more players you have, the more balls you have that bounce off the paddles when it splits, making it pure chaos (and pure fun). There is also a Space Invaders stage, where you launch projectiles at incoming invaders using your arms. This one isn’t as fun to me as an adult gamer, as there is no goal since the score keeps adding up.

The rest of the mini-games are fun to experience once or twice, but as an adult, I soon grew tired with them. I do have to say though that the disco music star stage is a bit of fun, even as an adult, since you control the speed of the music with the speed of your movements (although, sadly it’s only possible to slow the music down. Wailing your arms around, as fast as you can,  make the music change to hyper speed). The music in that mini-game, as well as the rest of the game, is excellent. Double Fine’s games always have a fantastic score, and this game is no different. I found myself humming the music long after the game was over.

I can’t conclude the review without mentioning what I’m sure is on everyone’s mind. Ever since the game was announced, it has been stated that it’s fun for kids or for a college frat party. There’s definitely mini-games in here that are designed for the latter. The aforementioned disco music star stage is pretty trippy, since your body is shown in a star with neon colors all around it, and occasionally a shooting star with your picture on it shoots by. However, there are two stages in particular that are downright psychedelic. There is a stage where everyone is transplanted into a kaleidoscope, with their image bending, twisting, and blending into the colors of the kaleidoscope. But by far the most trippy mini-game is a stage where everyone in the room is shown in silhouette form and colors emanate out from them, slowly fading out with each movement.

Now that I got that out of the way, I can safely wrap this review up. If you have a young child, an Xbox 360, and a Kinect, this game is a must buy. If you have an Xbox 360 with a Kinect and are looking for a trippy party game, this game is also a must buy. For everyone else who a Kinect-enabled Xbox 360, you should be able to have fun with it. It’s definitely one of the few games out there that make full use out of the Kinect hardware. It’s also priced 1/3 cheaper than Double Fine’s other console games, which in my opinion, makes Double Fine Happy Action Theater well worth the price of admission.