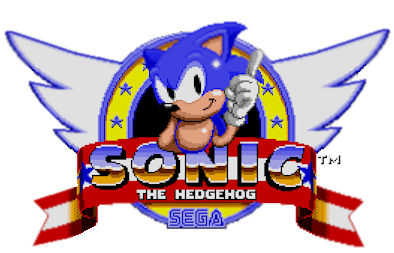 The Sonic the Hedgehog review was previously published on Jupiter Beagle on October 2, 2008.

Sonic the Hedgehog is available on consoles, computers, tablets, and smartphones.

Sonic the Hedgehog brought speed to a genre that was previously all about exploration.  The levels are laid out well enough so that exploration is still possible, but the game is built with the intention to run through courses at breakneck speed.  Going into a roll by pressing down while running causes Sonic to go faster through loops and down hills.  Sonic’s speed can be magnified by obtaining a shoe powerup, which increases Sonic’s moving speed exponentially.  Sonic attacks enemies by rolling into them or jumping on top of them while in a roll.  He will lose rings whenever he touches an enemy.  However, there is no health meter in this game. Sonic’s health is gauged by the rings he carries.  As long as Sonic holds at least one ring.  As with the Super Mario Bros. series, 100 rings gives you a bonus life.  There are also invincible power-ups, much like Mario’s stars that make Sonic impervious to attack for a short period of time.

The lack of the spin dash that was introduced in Sonic 2 is definitely noticed here, but Sonic 1 still has my favorite levels of any Sonic game I’ve played.  The layout of the levels is very important in a platformer, and the level design of Sonic 1 is top notch.  There are several zones in the game, and most zones have 3 levels, with the third level being a boss battle against Sonic’s enemy Dr. Robotnik in one of his robotic contraptions.  The bonus stages in this game are a little weird compared to later games in the series.  Here, Sonic enters a bonus stage through a large ring whenever he has at least 50 rings when he reaches the end of the stage.  In the bonus stage, Sonic is in a constant spin, and so is the bonus stage board.  You have to guide Sonic to the chaos emerald each stage, that is surrounded by breakable crystals.  You also must avoid red exit markers that will end the bonus round immediately.  When all 6 chaos emeralds are collected, the player will get the “good ending” upon completing the game.

Sonic the Hedgehog was released on a lot of systems. The game is just about equal on each system (other than control issues due to the limitations of some systems). The newer releases have savestates (or in some cases save points, where the game is saved at the start of each level). This ability to save is a feature that is greatly appreciated for this game. In the original, you had to restart the game completely if you ran out of lives and continues. The game also had to be restarted if somehow the power on the Sega Genesis game console was turned off. It’s nice to not worry about leaving the console on to take a break from the game for a while. The Xbox 360 release has many atures, which I will go into detail below. If you aren’t interested in the Xbox Live Arcade version, you can skip down to the final verdict below.

Sonic on the Xbox 360 is presented well. The sound emulation is well done. The music is faithful to the original, and the sound effects sound good as well except for a few that sound a little off. It’s nothing too major and doesn’t happen too often, so it doesn’t take away from the pleasure of playing the game in the slightest. There are many options for the graphics display. The default setup has the screen at the original aspect ratio with blue borders around the screen where the television screen size surpasses the game’s resolution. The blue borders really stand out and made me sick while playing. Thankfully, these blue borders (called wallpaper by the game) can be turned off, and the borders will be a plain black. Even better,  my opinion, is the option to stretch the screen to match the size of your television. There is also an option to smooth the graphics. The smoothing and screen stretching is my favorite combination. This makes Sonic look wonderful on my HDTV.

Sonic the Hedgehog is one of the best pure platformers. If you are a Sonic fan or a platformer fan, you owe it to yourself to pick this one up.