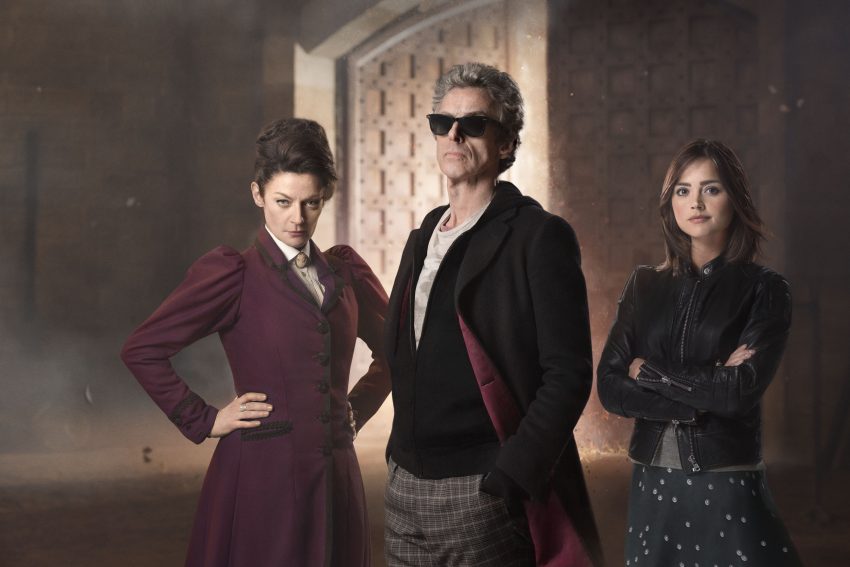 The Doctor Who: The Magician’s Apprentice review was previously published on Jupiter Beagle on September 28, 2015.

Doctor Who: The Magician’s Apprentice is available on DVD and streaming services.

Peter Capaldi’s second series as the alien timelord, The Doctor, begins with a bang. The first part of a two part story reunites The Doctor with the timelord he has known his entire life, The Master, revealed last year to have regenerated into a timelady now going by Missy, or The Mistress. She received The Doctor’s confession dial, which is the timelord’s last will and testament, and as she can’t open it until The Doctor dies, she realizes that The Doctor believes he only has one day left to live.

Missy recruits The Doctor’s current human companion, Clara, to help her try to search throughout space and time to find The Doctor. Clara’s massive intelligence, which is nice to see utilized again, as well as Clara and Missy’s knowledge of how The Doctor thinks, allow them to find the exact moment in time and space where The Doctor is spending what he believes to be his last day.

I really enjoy the Michelle Gomez as The Master, so I was pleased to see that she has returned after her apparent death last year.  She’s just as delightfully twisted here as she was in her debut season.  We also get to see more of how The Doctor and The Master view their relationship, which has been a big part of the new run of Doctor Who, ever since John Simm’s turn as The Master during David Tennant’s tenure as The Doctor.  Having Clara involved makes for an interesting dynamic, as like his relationship with The Master, The Doctor has also known Clara since childhood.  They are truly the two people who know him The Doctor the best, although their relationships with The Doctor couldn’t be more different.

The new villain, a humanoid made out of snakes, is satisfyingly creepy, but it is the returning villain who is center stage in this episode.  Peter Capaldi’s tenure as The Doctor seems to be about embracing the classic series, from his choice of clothing to the villains he faces.  Nothing is as true here, as he meets his long hated foe, the Kaled creator of the Daleks, Davros.  We learn that The Doctor did something in his past regarding Davros that he regrets, and Davros calls him out on it on his deathbed.  We’re then left with a haunting finale that draws parallels to a story during Tom Baker’s time as The Doctor, that is widely named as one of the best Doctor Who serials, Genesis of The Daleks.

I quite enjoyed this episode.  It was great to see Missy again, along with Davros.  The cliffhanger ending works exceptionally well and does its job in making you anticipate the finale.  Some things went by a bit too quickly though, such as the appearance of the Shadow Proclamation and the sisterhood of Karn.  While it made sense to show them in a way, since it showed that Davros had his servant searching everywhere for The Doctor, it would have been nice to see more than a few seconds of each location.  In addition, Missy’s survival is never explained, although its possible it will be in the finale.  Everything else in this episode though, was top notch, especially The Doctor’s huge use of anachronisms to make his appearance in the past known.  If the next episode is as thrilling as this one, the rest of the episodes of this series will have a tough act to follow.