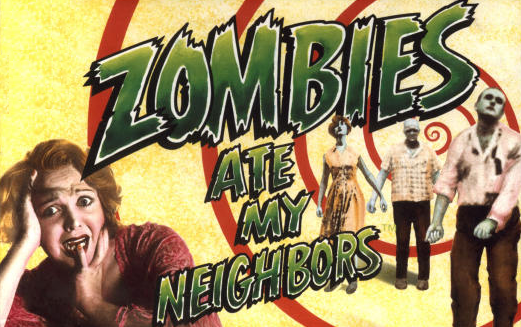 The Zombies Ate My Neighbors Review was previously published on Jupiter Beagle on October 16, 2008, as part of a 20 Days of Halloween segment.

Zombies Ate My Neighbors is currently only available from the used games market.

Allow me to switch gears for today’s 20 Days of Halloween review with a video game.  I present for you the horror spoof developed by LucasArts and published by Konami, Zombies Ate My Neighbors.

The game stars either Zeke or Julie (or both if the game is played with two players), as they scramble to save their neighbors from certain doom.  The animations of the characters and enemies are well done, and still, even today look good, as they were presented in a pleasing cartoon style.  The music suits the game quite well, although it wasn’t overly memorable.  The gameplay, however, is a lot of fun.  The game is a top-down run and gun game, where the player has to navigate around the neighborhood and fight various B-movie monsters such as vampires, werewolves, and of course, zombies.  Zeke and Julie can pick up potions that will turn them into monsters for a short period of time, giving them more strength.

There are 48 standard levels and several bonus levels.  As was standard for LucasArts for the time, quite a few in-jokes that only fans of LucasArts would get were included in the game.  One of the bonus levels was themed after a point and click adventure game that was released at the same time as this game.  Another bonus level was themed after the LucasArts office building and featured LucasArts employees of the time.

The game is a great spoof of horror B-movies, and it does things well to feel like a B-movie itself.  It’s a fun arcade-style run and gun with great humor and pleasing graphics.  There was a rumor a while ago that the game was coming out on the Wii Virtual Console.  It would be great if this game did get rereleased for a modern audience because it is definitely well worth playing.