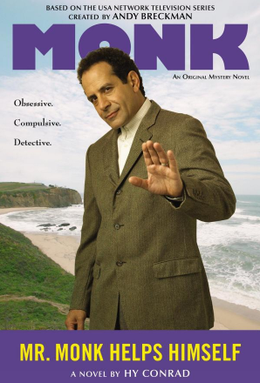 The Mr. Monk Helps Himself Review was previously published on Jupiter Beagle on June 20, 2014.

Mr. Monk Helps Himself is available at online book retailers such as Amazon and Barnes and Noble.

I just finished Mr. Monk Helps Himself, the 16th book in the Monk series, but the first one that’s written by Hy Conrad instead of Lee Goldberg.  I really liked Lee Goldberg’s continuation of the Monk series after the finale, and his evolving of the characters (especially Monk’s brother Ambrose, who was woefully under-utilized in the show, and Randy Disher, who was given much more respect in characterization in the novels than he ever was given in the television show), so I was curious to see how Hy Conrad would continue that.

Luckily, he manages to do so quite well, handling both the characters from the show respectfully as well as the original characters created in Lee Goldberg’s Monk novels.  The characters were always my favorite part of both the television show and the books, even more so than the mysteries, so I’m glad to see that they’re still being characterized well, 125 episodes and 16 books into the franchise. Hy Conrad even has a few character evolutions and major changes himself already (including a major one in Natalie’s treatment of Adrian Monk, which I could totally see the television show Natalie doing if the show was still on the air in 2014).

Hy Conrad’s excellent treatment of the characters shouldn’t be a surprise though since he has been writing for the Monk television series since season one.  Mr. Monk Helps Himself is actually a story that was originally pitched for the television show but wasn’t used as the idea morphed into something completely different.  I’m glad to see that they did finally get to use the idea though since it was quite good.  The main mystery surrounds the death of a clown (which is one of Monk’s top 100 phobias) who was well known for entertaining for the children of celebrities.  As the mystery unfolds, they find that it’s somehow connected to a cold case that made national headlines years ago.  And, of course, the connection is not obvious, so it takes the detective work of everyone involved to work it out (which are the stories I love the most since even though Monk is a brilliant detective, Captain Stottlemeyer and his lieutenant aren’t slouches either).

At the same time, Natalie is trying to prove herself to make good on her recent ultimatum that she become full partners with Monk, rather than detective and assistant as they have been for almost a decade.  She goes to a retreat of a self-help guru from which both herself and Monk’s current girlfriend have purchased self-help CDs.  After a meet and greet, the self-help guru does a yoga stretch and jumps off a cliff, right in clear view of everyone at the resort, including Natalie and Monk.  Her body is later discovered, and Natalie is able to make a positive ID, but she’s convinced that she was murdered, despite the fact that everyone saw her jump.  Of course, Monk, the captain, and the lieutenant aren’t convinced since everyone saw her jump and the coroner ruled that her death was consistent with a fall and then ultimately drowning.  So, Natalie has to work on the case alone, with only Monk’s girlfriend as her temporary assistant, while the rest of the police force works on the clown murder case.

Mr. Monk Helps Himself has a great storyline, with two intriguing mysteries, and contains some great characterization and character development, as well as the subtle humor that you expect from the franchise.  After reading this, I’d say this is one of my top ten favorite Monk stories, from both the novel series and the television show.  Hy Conrad truly knows these characters well and does them justice in his first outing as the author of the novel series.  It’s well worth the read.