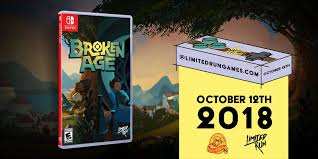 Switch cartridge production takes a while and once the cartridges are finished, they need to be shipped from Japan to the United States, where Limited Run Games will pack the cartridge in a standard Switch case. The cool thing about these Limited Run Switch releases is that each game comes with a complete byte-sized manual, which is a really rare thing nowadays.

Because of the long production time, it’s likely that the Limited Run physical release of Broken Age for Switch won’t ship until December.