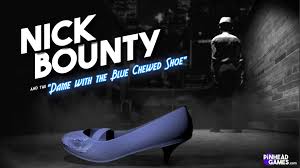 Mark Darin created a Kickstarter crowdfunding campaign. You may remember Mark Darin as a designer at Telltale that helped create some of their best games (Strong Bad’s Cool Game for Attractive People, Puzzle Agent, Hector: Badge of Carnage, The Walking Dead, Tales from the Borderlands, and Batman Season Two, among many, many others).

Now he is going back to his roots. Before he became a designer at Telltale, he designed two free adventure games: Nick Bounty: A Case of the Crabs and Nick Bounty: The Goat In The Grey Fedora. He is now creating the third game in the series, that you can help fund now by going to the Nick Bounty and the Dame with the Blue Chewed Shoe Kickstarter page.