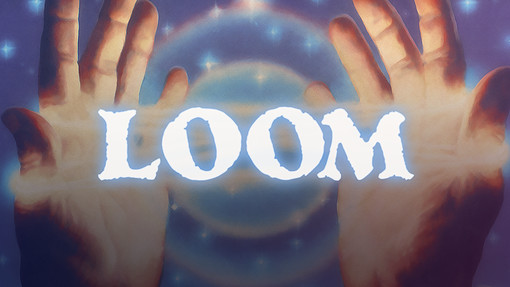 The Loom Review was previously published on The Adventuress on October 20, 2014.

Loom is available for modern computers on Steam and GOG.com.

Loom is an easier adventure than the other games in the LucasArts adventure game catalog, and it has a unique musical based interface that serves as the means for solving puzzles in lieu of an inventory, but it still manages to be a pretty satisfying experience.

Loom is set in a magical world that is inhabited by several guilds of people with unique magical abilities.  The game follows Bobbin Threadbare, a young member of the guild of the weavers, who spin magic through the mystical Loom. Bobbin has never been allowed to be trained in the ways of his people, although the weaver Hetchel has been training him in secret.  On his 17th birthday, he discovers that he was born of the Loom itself, and the elders fear him, as they believe that his birth has brought chaos.  The elders attempt to punish Hetchel, by turning her into a young swan, but the spell backfires and all the weavers are changed into swans, who fly away.  Bobbin, now the only remaining weaver, goes on a quest to find the flock of swans and find out what happened to his people.  It’s an intriguing story that was supposed to be a part of a three-game series.  Because of this, it does end on a cliffhanger, but it’s still a satisfying story on its own.

Unlike the other games in the LucasArts adventure library, Loom doesn’t have an inventory system or use action verbs.  Instead, puzzles are solved through Bobbin’s magical distaff, which is powered by musical melodies known as drafts.  Throughout the game, Bobbin points his distaff at objects to learn new drafts that contain the power of those items, from tasks ranging from opening things, to changing the colors of certain objects.  The puzzles aren’t too difficult, making Loom one of the first casual adventure games, as it was a short adventure with puzzles that weren’t too difficult, but it wasn’t aimed at children.

The game has an art style reminiscent of other LucasArts adventure games of that period and contains excellent backgrounds that really show the vastness of the game’s world.  There are several versions available.  The original 16 color EGA version and the 256 color FM-Towns version have character close-ups, whereas the 256 color DOS CD version lacks these close-ups due to the inability to properly lip-synch the voices of characters at the time of release.  Because of the lack of close-ups, the DOS CD version also omitted several lines of dialog that was present in the close-up scenes of the EGA and FM-Towns versions.  The DOS CD version did have excellent voice-overs, which were recorded in the style of a radio play (the original version did come with an extended radio play) and complement the game’s style immensely.  All versions also have an excellent soundtrack that is comprised of several classical music compositions by Pyotr Ilyich Tchaikovsky.  The FM-Towns and DOS CD versions have improved digital versions of the soundtrack. The FM-Towns version has tracks that are directly from the EGA original, whereas the DOS CD version has tracks that have been re-arranged by George Sanger.

Loom is a departure from the usual LucasArts adventure in many ways.  It’s a casual adventure game, with easier puzzles than the rest of the LucasArts adventure library, and it throws out the traditional action verb and inventory based system to a system where puzzles are solved through musical drafts.  However, Loom does have an excellent story and charming art style.  The best way to experience Loom differs for many people due to the differences in the versions.  The best two versions to experience Loom are the DOS CD version, which has improved 256 color VGA artwork and a rearranged and improved version of the original classical music score and voices but cuts a lot of the dialog from the original release due to the lack of character close-ups, or the hard to find FM-Towns version which also has 256 color artwork, has an improved digital version of the music from the EGA version, and retains the extra dialog, but lacks voices.  It’s also best to play on ScummVM, as there is a shortcut available that will show the musical drafts that you have learned throughout the game.  If you’re willing to play it despite the differences from usual adventure games, you’ll find that Loom is ultimately a unique and satisfying experience.