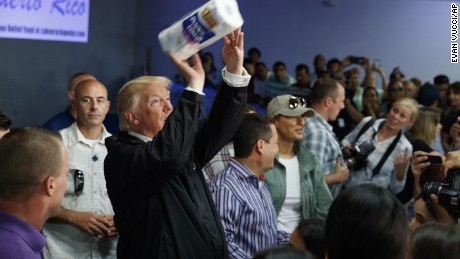 On Thursday morning, President Donald Trump falsely made a claim that nearly 3,000 people did not die due to Hurricane Maria last year. The death toll estimates were independently researched by George Washington University, and confirmed by studies conducted by Harvard University and Penn State. However, President Trump made a claim, without proof, that the numbers were inflated by Democrats in an effort to discredit him.

3000 people did not die in the two hurricanes that hit Puerto Rico. When I left the Island, AFTER the storm had hit, they had anywhere from 6 to 18 deaths. As time went by it did not go up by much. Then, a long time later, they started to report really large numbers, like 3000…

…..This was done by the Democrats in order to make me look as bad as possible when I was successfully raising Billions of Dollars to help rebuild Puerto Rico. If a person died for any reason, like old age, just add them onto the list. Bad politics. I love Puerto Rico!

On Friday, as Hurricane Florence battered the southeastern United States, President Trump continued, again without offering any evidence on which to back up his claim.

“When Trump visited the island territory last October, OFFICIALS told him in a briefing 16 PEOPLE had died from Maria.” The Washington Post. This was long AFTER the hurricane took place. Over many months it went to 64 PEOPLE. Then, like magic, “3000 PEOPLE KILLED.” They hired….

….GWU Research to tell them how many people had died in Puerto Rico (how would they not know this?). This method was never done with previous hurricanes because other jurisdictions know how many people were killed. FIFTY TIMES LAST ORIGINAL NUMBER – NO WAY!

It is true that the official death count was reported as sixteen when President Trump was there, but reporters such as Vox’s Eliza Barclay and Alexia Fernández Campbell had already found that the death toll was lower than reality two weeks into the disaster, as they had verified at least 81 cases at that point.

While it is also true that the vast majority of people died after President Trump had left, the people included in the death toll all died as a result of the hurricane. There was an island-wide blackout that lasted for months, which led to deaths due to lack of electricity for vital medical needs such as oxygen tanks and refrigerators for diabetes medications. The lack of electricity also meant that food couldn’t be kept and there was no access to clean water. On top of that, the Federal Emergency Management Agency was slow to respond, so vital medications and food supplies did not reach the island in time to save many of the victims of the hurricane.

Members of both major parties in the United States refuted the President’s claims. The Republican Speaker of the House, Paul Ryan, stated “casualties don’t make a person look bad. I have no reason to dispute these numbers. I was in Puerto Rico after the hurricane. It was devastated. This was a horrible storm. I toured the entire island. It’s an isolated island that lost its infrastructure and its power for a long time.”

The Republican Florida governor Rick Scott responded on Twitter, “I disagree with POTUS – an independent study said thousands were lost and Gov. Rosselló agreed. I’ve been to Puerto Rico 7 times & saw devastation firsthand. The loss of any life is tragic; the extent of lives lost as a result of Maria is heart wrenching. I’ll continue to help PR.”

Senator Rob Portman, R-Ohio, stated “the official count, as I understand it, is 3,000 people died as a result of that hurricane. So that’s the number we should accept but we also should not play politics on either side of this.”

Senator Richard Blumenthal, D-Conn., stated that President Trump’s “beyond ridiculous” claim was “an insult to the brave men and women who every day provide medical care and other first responder aid to people in distress situations. The toll is factually established. The death toll in Puerto Rico is abominable and abhorrent. It’s a lesson in our need to do better. Puerto Rico is still a humanitarian crisis.”

Representative Joe Kennedy III, D-Mass., also responded on Twitter by stating, “this is what your math looks like when you count black or brown lives less than white lives.”

Representative Adam Schiff, D-Calif., stated that the comments “display an ignorance as large as the storm itself.”

Some Republican senators questioned the numbers but did not deny that they were higher than the originally reported sixteen.

Senator Lindsey Graham, R-South Carolina, stated “I really don’t know the number of deaths but it is certainly more than 16 whatever the initial reports were. It’d be interesting to find out exactly what happened. Were the deaths the result of the hurricane itself or inability to get food or water afterward? I don’t know. It’s something  I’d be interested in finding out. I don’t buy the idea that the president is indifferent to our friends in PR. I don’t buy that but I do believe we can learn from the mistakes that were made in Puerto Rico”

Senator Chuck Grassley, R-Iowa, stated “There is a big difference between what was originally reported and what ended up being the final figure, and I think that I’d like to know why that is. I think the president is in a position to find out why that is and I hope he can report the reason.”

The Republican governor of Puerto Rico, Ricardo Rosello, however, did not dispute the official numbers. In a statement released in Spanish and translated by ABC News, he stated “the victims in Puerto Rico, and the people of Puerto Rico, do not deserve that their pain is questioned. Today I’ve seen that the number and process to find excess deaths has been questioned and it is something that we have to leave behind.”

The photograph in the header of this article was taken by Evan Vucci for the Associated Press.